While taking the tour at every and each gallery I was making sketches and notes by my own. The thoughts about Wade Guyton: ‘Das New Yorker Atelier Abridged’ were that basically the artist kept using same geometrical shapes and websites. He also used paintings and drawing such as Hartley ‘E’ 1915, Oil, 47,5 x 47,5. Prints reminded me of the ones that are printed on the American notebooks. The artists used a lot of colours that are bright, neon but also blacks and whites or the whole cobalt blue piece was shown. The prints were in bad quality what was even more interesting to watch. 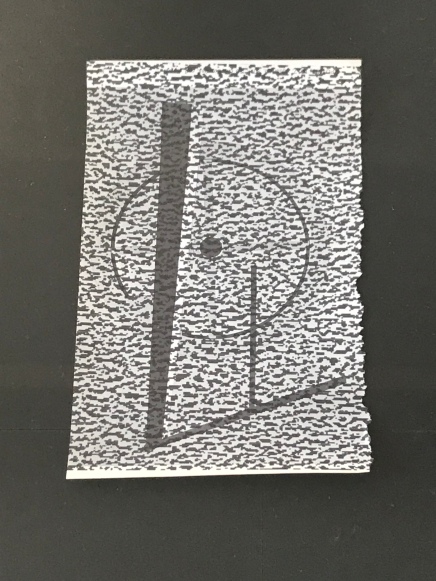 Rose Wylie ‘Quack Quack’ was my favourite exhibition I have been to lately. The style of the paintings and also the inspiration and the way they were created is really similar to what I am trying to achieve in my pieces. The artist focuses on her life experience, film notes (artist’s serie of painting featuring movie scenes and/or actors and actresses such as George Clooney in Syriana), nature (influenced by parks, animals etc). She paints the way she remembers and it’s not always clear and obvious what makes the paintings way more appealing and also they made me wanna read more about them. The use of colour and simple composition was just super fascinating for me. The abnormal, grotesque and childish perspective on the World are the adjectives I can easily relate her work to. I focused on her little notes on the sides of the paintings such as ‘Who afraid of Virginia Wolf/ Cat on a hot tin roof/ Giant/ Cleopatra’ on ‘ER & ET’ 2011, Oil on canvas. 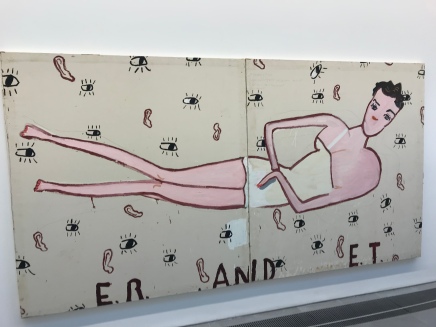 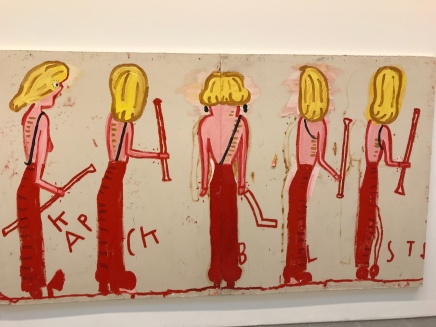 Later on I moved on to the South London Gallery where two exhibitions were being held. First one was Michael’s Armitage ‘The Chapel’. This one was really good as I liked the colours as well as the references to real life in Africa. What differentiate these pieces from others is the use on lubugo bark cloth instead of the regular canvas. 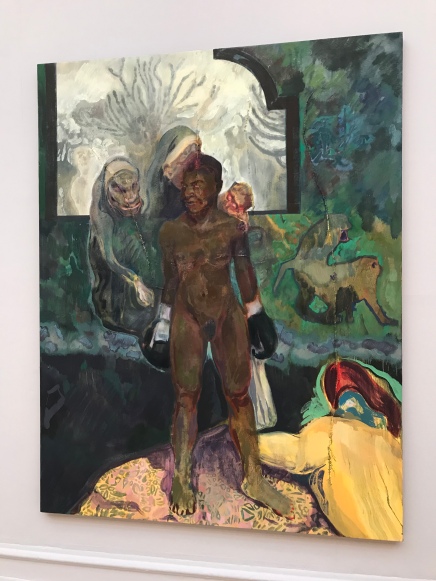 The exhibition that was most boring and most difficult to understand for me was Ilona Sagar’s ‘Correspondence O’. It basically was only well presented and the pieces proved that the artist did a really good research and went deeper than probably anyone else in case of the Pioneer Health Centre in Peckham. The space it was exhibited in was also really tiny and it affected that there was not much to see and also the topic is related to medicine and social issues at the time which I am totally not familiar with although if I had more time I might stay there and read the books that were the part of an exhibition.

The last exhibition was the one at the Camberwell Space at one of the UAL’s colleges. It was actually pretty good and I really did like the presented pieces in their form and their general aim. My favourite work was ‘Preliminary Notes to Self for the Making of the Brexit Tapestry’ 2018 by Brigitte Mierau. It was made out of cotton fabric, polyester thread, safety pins, staples, felt, acrylic paint and wood. The space that the exhibition took place in was also really nice as it was pretty spacious and gave an opportunity to watch the work from many angles. 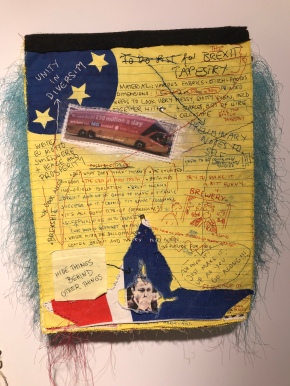 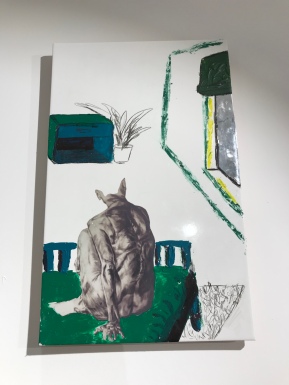