At the recent CTS session we had a discussion about curation; how it changed over the centuries and how did museums and galleries were accessible to the masses. At the end we were given boxes containing parts of various archives available at LCC for instance the zine collection and Stanley Kubrick’s archive.

A Private View at the Royal Academy, 1881, a painting by William Powell Frith (1881) is a suitable example of the separation between the mass and the minority of higher class which is clearly visible at the painting on its own with no people from a different social class. The art was only accessible for aristocracy etc. Compared to currently held exhibitions at the galleries (mainly the modern art ones) the frames vary a lot, they used to be heavy and pretty expensive, but now no one pays attention to these that much unless it’s an exhibition in National Gallery or the British Museum. 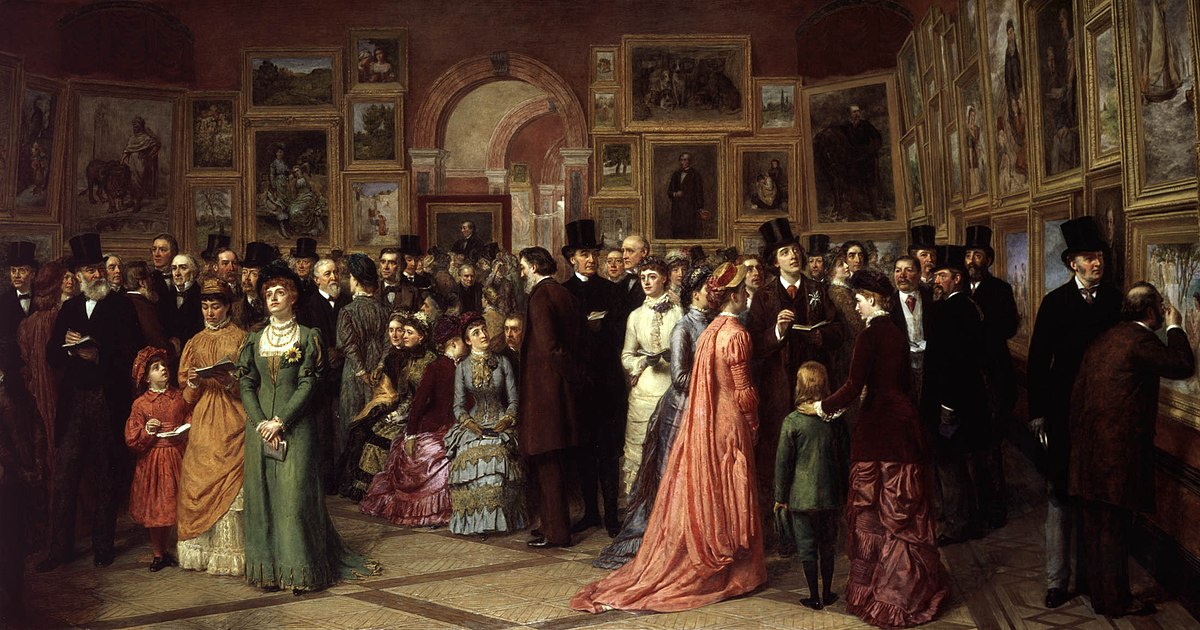 We were briefly informed about the British Museum’s history. It was first opened in the Montague House in 1759 by James Simon. There were more than 70.000 pieces of the collection founded by Sir Hans Sloane. It was meant to be a free place for learning, but out of all, the visitors had to be approved first to get in. Apparently, only higher classes were able to enter the museum, while the working classes, children and women were not let in.

The north front of Montagu House and Gardens. Engraving by James Simon, 1714

The very first museum opened to the masses was Louvre in Paris. The aim of it was to give people a necessary and free access to culture, no matter on how much money do you have and most importantly who you are. The issue was, there were paintings of kings and queens only but people coming in were just ordinary people. It was very problematic as the visitors destroyed the pieces and they had to restore the original paintings.

As I said at the beginning, we discussed ways of curation over the centuries. From heavy frames to frameless pieces of work. The curation changed significantly; the sculptures were being grouped and put in one room as well as the paintings held separately so the story was similar relating to the objects in one room, for instance the fashion exhibition at the V&A.

Most of the museums were bombed during the World War the Second and UK didn’t have money to rebuild the collections of the British Museum. The US had money as they didn’t take active part in war as the UK did, so they invented a curation where you walk with a curator and being informed about the paintings, the Americans changed the system, they came up with an idea how should the art galleries work like. Instead of having huge public institutions you have spaces that are created for the art itself. Modern art museums were transformed into a timeless places with no clocks hanging on the walls and a simple lighting.

We also had two tasks to do, one about the Parthenon Sculptures whether to leave them in London or give them back to Athens as they’re a huge part of a Greek history and heritage. Second, to curate our own display in 30 mins, we had a part of a Stanley Kubrick’s archive including his research on ‘2001: A Space Odyssey’.